The family behind the hops 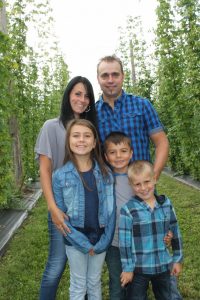 Houblon des Jarrets Noirs is a family business, run by Francis Gagné and Anne-Marie Lessard, along with their three children: Ashley, Gabriel and Zack. Francis was raised on this third-generation family farm along the banks of the Chaudière River. His parents opted for diversified agriculture, including market gardening and dairy, hog and poultry production before deciding to give up dairy farming in the late 70s to focus on hog and poultry farming.

Francis only officially joined the Jean-Noël Gagné Inc. family farm in the early 2000s. After gathering their courage, he and Anne-Marie decided to find a way to better diversify the business.

Pondering their new strategy while gazing out at the many acres of fertile land before them, the two young entrepreneurs decided to try their hand at growing hops, to supply artisanal brewers who would be able to use this crop to its full potential.

Welcome to “Jarrets Noirs” territory! Jarrets Noirs (muddy shanks) was the nickname given to the brave, enterprising souls from Beauce, who, in the 18th century, travelled near-impassable roads in this wild, hostile region often sinking into mud up to their knees, but not letting it stop them as they made their way to sell their wares.

While too hostile for most at the time, the Jarrets Noirs’ untamed land proved incredibly fertile, perfect for growing magnificent bouquets of hops.

Houblon des Jarrets Noirs has taken up the mantle of courage and zest for life from these Beaucerons of yore, offering a product self-respecting brewers would be proud to purchase: quality Quebec-grown hops in large quantity.

Enjoy your visit and cheers to hops!

Be the first of your friends to like it.